From the windy west coast of Denmark to the volcanic fields of Iceland; Scandinavia is an area of true natural beauty. Since time and nature are considered some of the biggest luxuries of our time - put these five breathtaking natural sceneries on your bucket list!

Just a stone’s throw from the city of Stockholm, the natural wonder of the archipelago unfolds. With 30.000 islands, islets and rocks, this landscape is as breathtakingly beautiful during winter as it is during summer. Rough nature meets romantic scenery adorned with sandy beaches and rocky cliffs.
In the summer months locals enjoy the settings with a picnic and a chilled bottle of wine, but there are several restaurants and inns to choose from as well.
The archipelago spreads 80 km east from Stockholm to the Baltic Sea, and often a day visit is not enough. One can easily spend an entire holiday here and experience the blissful presence of nature and wildlife.

‘Beautiful’ does not even begin to cover Skaftafell National Park in the south of Iceland! This mountain region on the southern edge of the huge Vatnajökull Glacier covers 12.000 km2 - and it is a definite must-see when visiting Iceland! Since 2008 it has been a part of Vatnajökull National Park.
The contrast between active volcanoes, glaciers, glacier rivers, waterfalls and huge sandy plains is unlike anything you have ever experienced before, and it is recommended to explore the area with a guide.

The most impressive example of natural history in Denmark takes place on the island of Møn - the southernmost point of the country. When you stand on top of this huge cliff, you literally stand on 70 million years of history. The Cliffs of Møn was formed during the last Ice Age and today they form a 6 km stretch of chalk cliffs. The chalk consists of the remains of shells from million of ancient microscopic creatures, which lived in the seabed more than 70 million years ago. The cliffs emerged when the ice melted about 11.000 years ago.
Each year 20-40 cm of the cliffs disappear and some parts crumble into the sea, so explore it before it is too late. From the top of the cliffs visitors have an amazing view towards both Sweden and Norway.

The Hardanger Fjord is considered one of the most beautiful areas in Norway. It stretches 179 km (111 mi) and it is the second longest fjord in Norway and the third longest in the world. The area accommodates spectacular nature with its glaciers and grand waterfalls. It is possible to take some breathtaking walks and hikes here, but biking and canoeing is possible to. The most famous “must-see” is Trolltunga (the Troll’s tongue, pictured above). It takes between 8-10 hours to get there by foot, but when you finally do, it feels like you are standing on top of the world. Hardanger Fjord is close to the city of Bergen.

The Kvarken Archipelago (Finland) and the High Coast (Sweden) are located in the Gulf of Bothnia, which is a Northern extension of the baltic Sea. The area is a UNESCO World Nature Heritage site and offers visitors innumerable activities such as cycling, sailing, fishing, canoeing and trekking.
Local people live in harmony with this unique nature, which seems to allure tourists from all over the world year after year. Every now and then moraine formations from the last Ice Age emerges from the sea continuously creating more landscape to be explored. Embark in one of the many organized boat trips or plan a hike on your own - there are several open wilderness huts, which visitors can use for an overnight stay or just to rest during the day.

*The midnight sun occurs in the summer months north of the Arctic Circle. The sun remains visible at local midnight. The further North you go, the lighter it gets during the night. Watch the midnight sun in Svalbard, Norway, between April 20 and August 22.

The most romantic getaway’s in Scandinavia

I'm Regitse - an entrepreneur, Author, traveller and hotel nerd currently residing in Berlin.
When I'm not checking out new hotels, I'm writing about them (or my travels) and working on my content agency, Room22.
Welcome to my digital home! I hope you'll feel inspired and at home.

Quote of the month: “Stop writing about everythi
“Storytelling is a way to take people on a journ
{Ad/sponsored stay} Goodmorning sun, goodmorning C
Where do you enjoy working from the most?🗝 I ha
Follow on Instagram 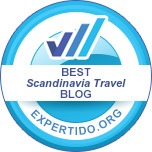